The bull market is long when you hear people in the coffee shop talking about how the Dow Jones Average has finally breached the 20,000 mark.  Who would have imagined record market highs at this point last year, when the indices ended the year in negative territory?  Or when new year 2016 got off to such a rocky start, tumbling 10% in the first two weeks—the worst start to a year since 1930? 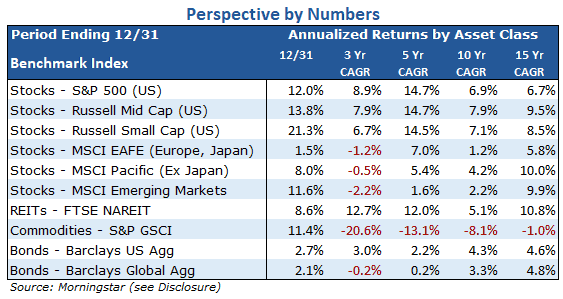 The markets eventually bottomed in mid-February and began a long, slow recovery, turning positive by the end of March, suffering a setback when the U.K. decided to leave the Eurozone.  In the end, the Dow finished at 19,762 for the year— the US bull market has continued for another year. Still, developed international investments contributed a slight decline to overall portfolio returns. Emerging markets were up 11.2% for the year despite a sharp decline caused by the post-Trump dollar rally.

To illustrate the unpredictability of short-term market movements, who would have speculated the Brazilian Bovespa index would have reaped a gain of 68.9% this year, despite all the headline drama around the Zika virus and political uncertainties that were reported during the Olympic games.  Russian stocks were up 51% for the year, despite sanctions from the U.S. government and lingering international sanctions related to the Crimean invasion. What will the bromance between Vladimir and Donald bring?

Short-term market traders seem to be expecting a robust economic stimulus combined with lower taxes and deregulatory policies that would boost the short-term profits of American corporations. But it is helpful to remember that we are entering the ninth year of economic expansion, making this the fourth longest since 1900.  In addition, growth has not exactly been robust; the U.S. GDP has averaged just 2.1% yearly increases since the Great Recession, making this the most sluggish of all post-World War II expansions.

Domestically, it’s clear that the new President wants to accelerate America’s economic growth, but there is much debate on his policy prescriptions. Will we rip up longstanding trade agreements, cut back on immigration quotas and deport millions of workers who crossed the border without a visa?  Will there be a wall built between the U.S. and Mexico?  Will the government pay for huge infrastructure projects, at the same time reducing taxes and thus raising the national debt?  Will Congress raise the debt ceiling without protest if that happens?  Will the Fed raise rates more aggressively in the coming year, or cooperate with the President-elect in his efforts to drive the economy into a faster lane?

International is likewise filled with many unknowns. China’s economic growth has stalled for the second consecutive year, and you will soon be reading about a banking crisis in Italy that could force the country to leave the Eurozone—potentially a much bigger blow to European economic unity than Brexit or a still-possible Greek exit.  Russian hackers may have ushered in an era of unfettered global intrusions into our Internet infrastructure, and there will surely be a continuation of ISIS-sponsored terrorism in Europe and elsewhere.

Every year of this longstanding bull market, we have to look over our shoulders and wonder when and how it will end.  With the January downturn and so much uncertainty at this time last year, double-digit returns on U.S. stocks in 2016 was not a sound bet.  Next year could bring more of the same, or it could fulfill the dire predictions many have made during the election cycle, including both Democrats and Republicans who believe the country is in worse shape than the numbers would indicate.

Time in the Market

History counsels that markets have a way of surprising us, and that trying to time these manic ups and downs is a loser’s game.  The general upward trend that is driven by capitalism and corporate profits has benefited long-term investors through myriad uncertainties, and is likely to continue even if interrupted by shorter-term reactions to political or economic events. Owning the asset mix that is appropriate for your comfort level and stage in life helps to navigate these uncertainties and is most likely the best path to achieve your desired outcome.