The year 2019 was an astounding year for all asset returns as the longest bull market in history continued. Markets looked past recession fears, impeachment proceedings, and heightened tensions with Iran. US-China trade tensions stabilized for now. With markets trending higher it’s tempting to hope that taking more financial risk than you need is good for your wealth building. Hope isn’t a sound investment thesis! History counsels that it’s best to own the right asset mix and rebalance periodically (buying low and selling high). This proven discipline helps you stay on track without exposing yourself to undue risk.

Some Highlights Going into 2020

• Elon Musk’s 420 dance on the graves of Tesla short sellers! Tesla stock soared past $420 and above $500.
• Apple, Google, and Microsoft passed $1 trillion in market capitalization
• Unemployment and interest rates near historic lows; US manufacturing has recently weakened
• It’s an election year – don’t trust social media for your facts

This president frequently claims that he has created the greatest economic boom in US history and that had he not been elected, your 401k would be down the tube. The data in the table below covers the past 10 presidential terms, and tells a much different tale. Claims aren’t facts, and are easily invented for the Twitter Zone, where suspension of disbelief is a permanent state of mind. Your political persuasion aside: facts are objective, politically agnostic, and irrefutable.

The truth is, presidents often get more credit and more blame for how markets and economies perform. But if Trump gauges his administration’s success by stock market and economic metrics, let’s do it. Economic growth is measured by gross domestic product (GDP); stocks by the US stock market. On these metrics, he ranks only 6th of 10 over the past 40 years. Hardly the “greatest we have seen in our history.” More like Below Average.

Further, the administration’s increased spending and tax cuts are creating higher deficits and the need for more debt. That’s not sustainable and it’s not a good trend to burden future generations.

It’s true there are winners and losers in global trade. It’s also true that countries abuse and game the global trading system. It’s not true that protectionist policies like tariffs make an economy stronger. The administration was right to make fair trade an issue. However, aside from chest thumping and sound bites for the campaign trail, it hasn’t done much to improve trade economics or trade relations. The recently singed trade deal with China is outlined below.

The managed trade approach the administration is advocating he looks to be espousing is anti-market and borrows heavily from the Soviet Union style playbook which by any measure was economic catastrophe. The Peterson Institute for International Economics, a non-partisan think tank, highlighted several key areas of note in the 96 page Phase One US-China Agreement:

1. China commits to buy an additional $200 billion of US goods and services during 2020 and 2021; a 55% increase.
2. Few and very limited reductions to tariff and non-tariff barriers are cited to increase us exports.
3. Instead of using the price mechanism, China must import goods & services based-on dollar and volume commitments, with no regard to market prices or supply/demand.
4. Commendable rules on intellectual property rights, technology transfer, financial services, and agricultural standards.
5. Enforcement will be done on a bilateral basis

Other Comments on the Phase 1 Agreement:

Phase two is where the US hopes to tackle the China government subsidies that the U.S. thinks give China’s state-owned companies an unfair advantage in global markets (NPR).

“We think it is highly challenging for China to import $200 billion more goods and services from the US over the next two years without reducing imports from elsewhere,” said analysts at UBS.

Peterson further notes that other countries will ask if these quantitative commitments to the US came at their expense. What if a recession occurs? The managed trade is akin to Soviet Union quota-based economics. The move away from a market-based system will create even more distortions, favoritism, and corruption. The US experience of managed trade in the 1970’s didn’t work very well.

The Economist notes that Chinese exports to the US are down by 15%, yet its share of global exports are up since July 2018 when the first US import tariffs hit. Three explanation were offered: China’s 6% currency depreciation; goods get re-routed to other countries then to the US, thereby bypassing tariffs; Chinese companies are becoming more competitive in many industries and finding new buyers.

While Phase 1 is not comprehensive, it’s a good start if it can be accurately monitored and enforced. It’s also worth remembering that tariffs are taxes paid for by US consumers and businesses. 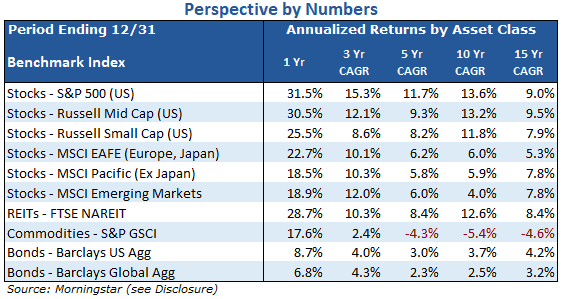 US large stocks were up on strong flows. Small and middle market companies lagged some.

International markets continued to trail US markets. We haven’t seen this wide of divergence persist for such long periods. Valuation differences will have to matter at some point. The new ECB president, Christine Lagarde, is rumored to be eyeing rate increases. This would help the region’s beleaguered banking industry and weaken the dollar on a relative basis.

In the commodities complex, oil finished the year strong on fears of Iranian related supply disruptions. Dr. Copper rose 10% in the quarter which usually signals an increase in industrial and commercial activity. Gold was up over 20% for the year.

The bond market was strong for the year as interest rates declined.