“America will never be destroyed from the outside. If we falter and lose our freedoms, it will be because we destroyed ourselves.” Abraham Lincoln

The year 2020 is over. Good riddens. A year we will never forget. A Bull market for stocks. A bear market for people. The distressing spectacle of January 6th was not a great start to the New Year. Despite numerous challenges, there is still reason for optimism.

To keep politics out of business is good advice (also true for family functions)! Yet politics is inextricably linked to economics. We can debate the messier side of politics over a beer. For today, let’s focus on the economic side of politics and what markets are telling us.

Democrats argue that because 70% of the economy is driven by consumer spending, issues like fair wages, consumer protection, and government programs that attempt to level the economic playing field should be emphasized. Republicans argue that because businesses create jobs, policy should focus on tax incentives, deregulation, and free market forces.

The Dems call Republican policies “Corporate Welfare;” the Republicans call the Dems “Socialists.” Economists call this tension supply and demand. That is a simplified framework, but you can’t have an economy without both.

When it became clear (sort of) that Trump lost, markets rallied as it looked like we would have a divided government where compromise would be required. The Socialists wouldn’t take over. Then democrats won the Georgia run-off, and the Republicans lost the senate. Markets rallied again on the notion that the “blue wave” could get a big stimulus deal with a much-needed infrastructure buildout. Socialist spending to the rescue? A little market schizophrenia?

The economist Joseph Schumpeter coined the term “Creative Destruction” to describe how capitalism works. Capitalism is a solution-based system, impervious to party politics, myths, and stale dogmas. New business models emerge, while others decline. Idealogues, demagogues, and hypsters may cause short-term noise and disruption. Markets ultimately care about future profits.

Markets, like any competitive endeavor, require rules, regulations, and laws.

US democracy, capitalism, and markets are the envy of the world because rules and regulations help guide and govern. Our system tends to temper extremes through elections and negotiations. In 2016, we had a Republican president with Senate and House majorities. The last time a president lost a second term, and his party lost majorities in both the house and the senate was President Hoover. The politico economic extremes have not endured. The pendulum has always moved right and left toward the center.

This pull towards the center has served the nation well, and we should hope that thoughtful, reasoned compromise will prevail.

In March, the world looked very uncertain. The U.S. Federal Reserve injected massive liquidity into markets which drove stocks to record highs despite the economic hit from the pandemic. Cheap money went looking for returns.
• Stock, bond, real estate, and commodity markets rebounded in a strong way of March lows.
• There was a record high 480 IPOs in 2020; more than twice the 233 IPOs in 2019, and 20% more than the previous record of 397 IPOs in 2000. (see Exhibit I)
• New business formations were highest on record in Q3 2020 according to the US Census Bureau, driven by online retail. The jury is out as to whether these formations will create jobs, income, and profit.
• Markets seem to be saying that fewer people are good for future profitability. That has been the fear of the AI revolution. Others argue that AI will be complimentary to human capital and create new jobs. Time will tell.

Many industries are still hurting. Recent unemployment data suggests a weakening. There are still 10 million more people unemployed than pre-pandemic. COVID isn’t a hoax, a miracle didn’t cure it, and it’s killed close to 400,000 Americans. However, vaccines came to market in record time, and we have good reason to believe normalcy is within view. 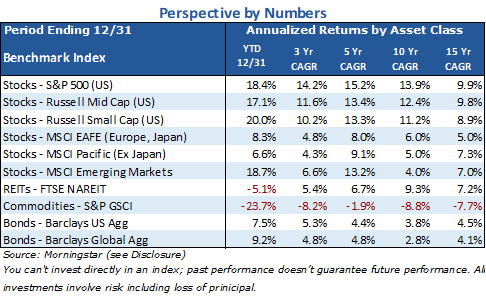 US markets were in a V-Shape recovery post the March lows. Amongst the major indices, small cap stocks accelerated in November to post the best overall returns for the year. Within the broader aggregate indices, growth outperformed value by a wide margin across large, mid cap, and small cap companies. Due to the late year surge in small caps, many strategists believe we are in an early-stage recovery heading into 2021.

REITs suffered early declines and its recovery still it in negative territory. It remains to be seen how a post COVID world will impact lease rates and vacancies.

The energy heavy GSCI commodity index continued its poor performance. Precious metals and industrial metals did well on the year, as investors looked to hedge against systemic risk and economies rebounded. Bitcoin surged prompting more controversy on whether it should be a part of one’s commodity or store of value allocation or it’s a fraudulent fad destined to lose. I wouldn’t wager a guess, except to say its highly speculative.

Bond market returns were strong for the year as yields declined substantially during the pandemic’s onset. Treasury yields have almost doubled since late September yet are still very low by historic measures. Many analysts believe the Biden stimulus plan will help to reflate the economy and rates will rise. After years of disinflatoary threat, a little inflation would be welcome.