“If you don’t know where you are going, you’ll end up someplace else.” Yogi Berra

The consistent theme in these quarterly reports is that sound strategy prioritizes your goals and gives you even greater odds to grow and protect your wealth. Many investment calories have been consumed chasing returns or trying to time market movements.

Today, most markets appear expensive by historical comparison. Fearless forecasters are calling for big declines; many have been wrong for over ten years waiting for the bubble to burst. Had we heeded the noise, we would have missed the longest bull market in history and the increase from the COVID lows. Just as a broken clock eventually gives us the correct time, we will see another market decline. Predicting when is a losing game.

What’s a good way to think and plan for uncertainty?

Example of How Not to Think

A former colleague is a Wharton MBA and CFA. In February 2016, he believed markets were overvalued. He sold all his stocks, paid the capital gains taxes, and waited for a better buying price. He also reinvested a good portion of the cash proceeds in Lebanese bank CDs paying 5%-6%. History is replete with emerging market currency devaluation and bank failures. I asked if he thought that was safe. He was confident it was.

He bought stock during the COVID decline and bragged to me about how well he did when the market moved up. He overlooked the “opportunity cost” of his 2016 stock sales. Even if his market timing was perfect and he had bought at the COVID low, the S&P was still up 44% from when he sold his stock (that is not a better price). He was further behind because he paid taxes on his gains, so another 30% less money to reinvest. And he must have forgot to tell me that the Lebanese currency lost 35% of its dollar value and that their banks froze most depositors’ assets. Those who were able to get any money out, did so at a substantial loss of the principal invested.

And yet he was proud of his results. How can an intelligent person, with an elite business degree and rigorous training in financial analysis, so deceive themselves?

Behavioral psychologists know we are prone to fool ourselves when we make bad decisions (or into making bad decision)! We have numerous ingrained biases that often conspire against well-reasoned decision making. My former colleague fell prey to a few of these biases:

• Intuition Bias: his gut told him the market was overvalued. Yet he waited over 5 years to buy, and then he bought at a higher price.
• Pattern Bias: he used a chart to tell him when to sell. Whatever he saw, didn’t work well.
• Pessimism Bias: he was sure the US market was going to fall.
• Optimism Bias: he has family in Lebanon so he felt comfortable with the banking system.
• Mental Accounting Bias: he was up. But he was up much less than he could have been.

Let’s face it. It’s easy to get emotional with our money. It’s the currency by which we fund our living and lifestyle. Yet emotion can be our worst enemy.

A strategic framework for where we want to go helps clarify risk and guide decision making. Just like Yogi said!

Example of How to Think

Ray Dalio is the founder of Bridgewater Associates, the world’s largest hedge fund. Bridgewater is one of the very few in the hedge fund business who has earned their fees over time. Dalio is a serious thinker who learns from his mistakes. One of his key operating principles is to assess what could happen if his thinking is wrong. What is the likely fallout from a wrong decision? That is the essence of a planning and investment strategy.

Dalio takes a measured view, grounded in fundamentals and historical context. In his estimation, markets today are in a frothy stage. Roughly half that of the depression and the dot.com bubble era. His two concerns are valuation and inflation. Ray isn’t wrong often but what if he is now?

Business valuation is not a snapshot or pure mathematical exercise. It’s a moving target based on growth, cash flow, and the risk and sustainability of the enterprise. It’s a combination of math, judgment, and trying to quantify the future in terms of today. Easier said than done.

A pending correction could mean muted future returns, a severe decline, or an uneven pattern of returns. If we knew the outcomes in advance we could all retire with ease, comfort, and plenty of margaritas!

What if the pessimistic bias does not prevail? The Roaring 1920’s followed the Spanish Flu pandemic of 1918-19. What if government stimulus, plus infrastructure spending, plus pent up demand creates the Roaring 2020’s?

None of our crystal balls are blessed with 20-20 foresight. Hence, the need for good planning and risk management. 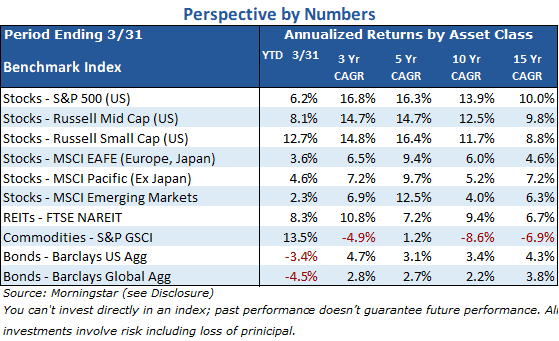 US markets started the quarter with some uncertainty. Optimism took root with $1.9 trillion in government stimulus and the prospect for an additional $2 trillion in infrastructure spending. Small cap stocks led the way. Cyclicals like energy, financials, and industrials outperformed the broader indices, which technology and consume staples lagged.

Most REIT sectors recovered on expectations that normalcy is on the horizon.

The energy heavy GSCI commodity index rose strongly on increased demand and supply controls. Industrial metals such as copper and aluminum were strong. Precious metals like gold and silver, typically a hedge on equity risk, declined on the appetite for economic risk.

Bitcoin continued its surge. The April 15, $100 billion IPO of Coinbase is seen by many as a validation of crypto assets. Others still believe it is highly speculative.