“I hope I never recover from this.”

William Shatner on his journey into space at age 90

Reflation, inflation, or deflation….that was so last quarter. This quarter “stagflation” also began to gain attention. Stagflation evokes fear of the 1970’s when inflation was high and economic growth was weak. If it were to set in, that would present a more difficult challenge for the economy as well as both the stock and bond markets.

Supply chain issues continue to create inefficient bottlenecks all over the place (I’ve ordered furniture more than once that can’t get delivered due to a lack of drivers). Wages remain elevated even as the recent jobs data was weaker than expected. Economic forecasts have been coming down globally. China had a high profile debt scare some thought would spiral into something bigger, and it has been more aggressive in regulating large companies and redistributing wealth within its borders. COVID is still hampering economic progress.

Further evidence of inflation: social security recipients will receive a 5.9% increase in 2022. The highest increase in 40 years! Sounds good but Medicare premiums will likely increase and offset much of the gain. And with low interest rates, its still a challenging environment to be on a fixed income in retirement.

Bipartisan political stupidness was also on stage. One side thought that playing chicken with the “debt ceiling” would be a good way to fire up their base and talk about fiscal prudence (when they aren’t controlling the purse strings). While the other side can’t find reasonable compromise amongst its own caucus.

Interest rates moved up based on fear that either the US government won’t pay its debts, or inflation will not be temporary. Or both. If rates rise, there are fewer borrowers which tends to slow economic activity which is not good for stocks. Especially with today’s high valuation. Over the past 6 weeks interest rates on 10-year treasury bonds increased from 1.17% to 1.60%, and the stock market fell over 5% from its peak. The fear, and a realistic possibility, is that if rates continue to increase stocks could fall much more.

With high stock valuations and low interest rates, its prudent to keep your investment allocations in line without getting too aggressive for your stage in life. Rebalancing opportunities will occur. The waiting is the hardest part. We believe in the dull rebalancing discipline because it has proven effective in lessening risk and reducing emotional mistakes that can happen during uncomfortable market environments. 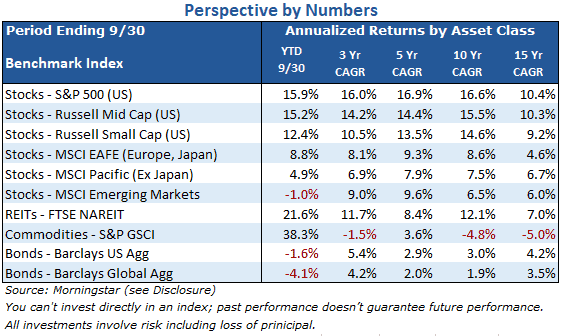 Strong earnings moved stocks higher in August. The Federal Reserve seemed to strike a dovish tone, confirming its hesitance to tighten policy too fast. However, lower growth, higher inflation, and debt worries cause a small correction. Tapering of quantitative easing (i.e. a slowdown in the pace of asset purchases) will be announced in November. Fed funds rate projections now show a faster rate hiking schedule than they did in June. GDP growth estimates declined to 5.9% for 2021 from the 7.0%, while inflation has risen. The Fed inflation forecast is 4.2% for 2021, up from 3.4%.

Eurozone equities were flat in Q3. Energy and technology performed well. Consumer discretionary stocks were among the weakest for the quarter. Luxury goods companies lagged on speculation of weaker demand from China due to its focus on greater wealth redistribution. Annual inflation continued to rise: estimated at 3.4% in September, up from 3.0% in August and 2.2% in July.

Asia ex-Japan equities recorded a sharply negative return in the third quarter, mostly due to declines in China. There was fear that the property developer Evergrande bad debt could spark a contagion like we saw with Lehman Brothers during the Financial Crisis. China is also experiencing power outages energy rationing, hurting production, and increasing inflationary pressures. The government’s regulatory crackdown on education and technology companies contributed to the investor selloff.

Energy exporters like Colombia, Russia, Kuwait, Saudi Arabia, Qatar and the UAE outperformed. India was the best-performing index market during the quarter and achieved a strongly positive performance as accommodative monetary policy and the easing of Covid-19 restrictions boosted investor sentiment. Sentiment was also boosted by a recent stream of IPOs.

REITs were flat for the quarter and still strong results for 2021.

Commodities were led higher by energy prices due to increased demand in the wholesale gas market; all its components were also positive. The price of natural gas was significantly higher in the quarter, closely followed by gains in the prices of gas oil and heating oil.

Government bond yields were mostly in sync. US 10-year yields fell slightly; European yields were near breakeven for the quarter. The Fed made several hawkish comments that could portend asset purchases as early as November. This so-called tapering has been much anticipated as inflation remains stubbornly higher than Fed targets.