The primary financial headline is the same: Inflation is over 8.0%; Interest rates are still rising. With a lot of political and economic drama beneath the surface.

In the time honored tradition, the party in power takes more credit or gets more blame for the economy. Especially in an election year. No single policy has led to this global bout of inflation. A mix of fiscal, monetary, and external factors (i.e., COVID, supply chains, war, supply disruptions) all got us here. It will take more than a single fix to get back to normal. And time.

Conflicting views of where we are in the economic cycle and what should and should not be done:

The Fed is Behind the Curve: But Which One?

Jeremy Siegel ranted that the Fed was late to raise rates and is now late to stop! For evidence, he cited lower commodity and house prices. Larry Summers, former Treasury Secretary and Mohammed El Arian former CIO at PIMCO think they need to keep raising rates. Jaimie Dimon, CEO of JP Morgan thinks recession is likely and stock markets could fall another 20% in a worst case.

Signs the economy is weakening was offset by a strong job market. Wages have increased but not as much as inflation. Housing affordability is a nightmare, especially for younger first time buyers.

Real Estate Insanity: From FOMO to Fear to Wait for the Dip!

By one analyst estimate housing payments today require 36% of income up from 22% in 2021. The highest since 1985. But that understates the affordability problem for first time home buyers. Without existing equity to offset rapid price increases, rising mortgage rates have pushed many out of the market.

Last year several employees in 401k’s that I manage took out hardship withdrawals, loans against their plan, and quit contributing so they could muster a down payment and have enough money to make monthly payments. Chasing the dream in this way is not healthy – fiscally or mentally. One of them is now having a hard time making mortgage payments. I doubt he’s alone.

When I eyed buying a house last year, I saw massive overbidding, no inventory, waiving inspections etc. In the 4-6 weeks that I looked, prices increased 20%. I decided not to play. I had the money, but the prices made no sense. That brilliant move cost me about 50%, as prices continued to make even less sense!

Over time annual housing appreciation has been about 4-4.5%; bonds about 4.5-5%; stocks about 9-10%. The past two years are out whack with historic and logical price patterns! It’s possible I missed something. Housing analysts say that desirable markets still are undersupplied and that should keep prices stable. Still, in the past two months prices have declined a bit. Inventories are increasing. We will see.

Economics, Politics, and the Culture: What’s the Fix

George Friedman’s, “The Storm Before the Calm,” takes a serious and insightful look at the institutional and socio-economic cycles that have occurred in the US since our founding. He notes that economic issues create social tensions. These tensions intensify as a cycle ends because existing institutions and policies fail to meet people’s needs. The old policy playbook fails to deliver, and a new one must evolve. History shows that economic frustration ultimately expresses itself through divisive politics. Sound familiar?

Globalization and outsourcing have been maligned and re-examined because the benefits have not been evenly distributed. Industries and many middle class jobs have been wiped out. Middle class wages have stagnated for close to fifty years. But consumers got cheap goods; business got higher profit margins. And outsourcing has proven to be a risky business model: COVID made clear that lack of diversification in supply chain networks has consequences.

Globalization is not a policy. It’s the world we live in. The policies that have favored capital investment and free trade since the early 1980’s had mostly bipartisan backing along the way. Today they are being challenged and vilified (at least on the podium). Don’t worry. There’s plenty of bipartisan hypocrisy to go around. The process of “reglobalization” and bringing some factories onshore is under way but it will take time.

Tax rates are at record lows; government debt at record highs. November mid-term elections are in three weeks. Whether Republicans or Democrats take control, a reasonable conclusion is that tax rates will go higher. Will younger people be pleased to fund Boomer retirements with higher taxes when they can’t afford to buy a home? A couple congressmen floated the idea of sunsetting Social Security and Medicare. What were they thinking? Who are they pandering to? How to reconcile these different demographics? Ponder that political football.

The challenge is in the complexity. The good news is that the country has always found a way to adapt to change. But it has always been messy as we are witnessing.

Valuation and Your Investments

Almost every market is in bear territory this year. Stock valuations have moved more in line with historical averages after 25% price declines. It has been the worst year ever in the bond market. High quality bonds that were paying 0.06%-1.75% in February are now paying 3.0%-5.0%. This means portfolios will have more income as part of the return mix. Once inflation and recession fears recede, market returns should turn less volatile and more in line with historical averages. 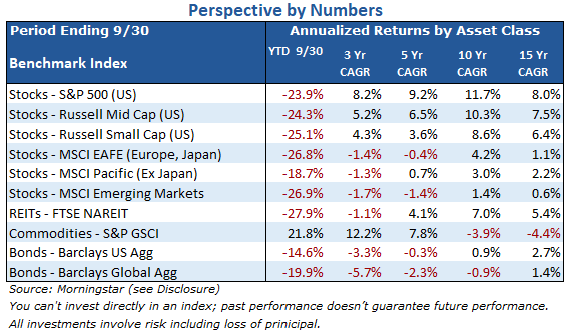