Rocky Mountain High: A Long Way to the Peak

The stock market was looking mostly like a V-Shape until last Thursday. The Federal Reserve made a few sensible observations about the economy, and that prompted a not so sensible 6% decline in one day. You could argue that the 43% increase from March 23 lows didn’t make much sense either as we have over 20 million people newly unemployed, so a sell off was due.

Still, the market is looking past a lot of economic uncertainty.

More from Mauldin’s SIC 2020 investment conference in mid-May. The session on the US economic environment provided some insight and useful historical comparisons. Amidst all the predictions, there was no consensus on the timing or the slope of an economic recovery. Never mind the “L”, “V,” or “W” shaped recovery. The best description I heard was for a Rocky Mountain recovery. Case in point: The May jobs report had expected a 7.5 million decline; the number came in at a 2.5 million increase. 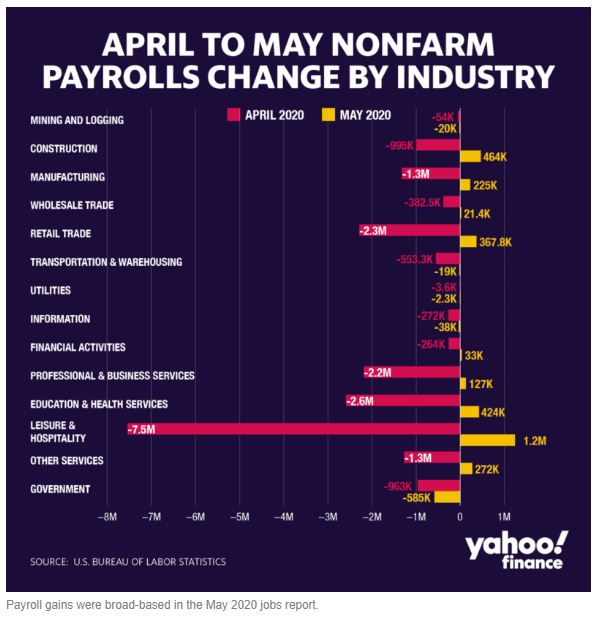 Deflation or inflation: Which is most likely to prevail? Each has different profit, business, tax, saving and investment ramifications. Many factors influence these including globalization and supply chains; population growth, fiscal and monetary policies, cost of capital, return on capital, technology adoption, and trade policies. Throw in an election year and policy incoherence, and you can see why predictions are a tough business.

Adding more debt to over indebtedness is not a growth strategy

Deflation: Lacy Hunt is an economist who works for a bond manager; also known as the wet blankets of capital markets. Glass half-empty types, mostly concerned with “return of capital.” Injecting large amounts of money into an economy usually creates inflation as too much money chases too few goods and services. In contrast, Hunt noted adding more debt to over indebtedness doesn’t work this way. The US, Europe, Japan, and China keep adding debt on top of debt (see Exhibit 1 below). Debt capital must create an income stream that pays principal and interest to be productive. If not, investment declines, the velocity of money slows, rates decline, and economies slow in a self-reinforcing cycle.

That is the situation we faced pre-COVID. COVID is accelerating these trends. The US position is weak, but relatively better than the others. Despite increasing debt, rates will remain low due to strong global demand for US treasuries (still considered the “risk-free” asset in financial markets). In contrast, corporate debt costs will rise, even as profits are declining. Add slow population growth to the picture and you get a weaker picture still.

Stagflation: David Rosenberg posited that consumer demand will remain weak. The government massive spending isn’t stimulus, its relief intended to buy time. High unemployment keeps a lid on spending, investment declines as businesses stay in survival mode, rates decline. The savings rate spiked from 7% to 33% in April. Lack of investment and high unemployment will reduce supply. In turn, this will eventually trigger higher prices even as the economy is stagnant.

Inflation: Jim Bianco made a strong case for inflation. Even if the economy is running at 90% of pre-COVID levels, that will mean fewer people are making products and providing services. Lack of supply means prices will go higher. Another case was made that supply chains will be less efficient causing higher prices. The 1918-19 pandemic was followed by the Roaring 20’s and a “live for the day” mentality which could spur demand for discretionary spending and leisure goods.

Of rare consensus among the mostly libertarian, republican, and free market orientation of the investment panelists was that Trump economic policies were incoherent at best. More colorful language was used for emphasis at several points;
• The US economy was running on debt fumes from the unfunded tax cuts and showing signs of weakening pre-COVID;
• Tell “tariff man” the 1930 Smoot-Hawley Tariffs turned a recession into a global depression. China isn’t paying us anything (ask US retailers). US importers pay customs duties; US consumers pay some of the cost via higher prices. Its true tariffs could hurt them if they can’t find another market (or they could weaken its currency in response). And hey, is Mexico paying for the border wall?
• Negative interest rates, which Trump has been calling for since last year, are “idiotic” and would “impale” the banking system and damage economic activity (we can look to Japan and Europe for case studies).
• To add to the “idiocy,” Lindsey Graham suggested we think about reneging on Chinese debt. That would distort the entire global financial system which is built upon the shoulders of US Treasury status as a “risk-free asset.

1. Inflation is the lesser evil because it’s an easier problem to fix than deflation. However, deflation has a strong case. The economy has a tough hike to its prior peak.
2. Taxes will likely move higher under either a democratic or republican administration.
3. People over 65 own 70% of the world’s wealth. Demand for bonds will remain strong. This will also keep a lid on interest rates as government debt yields will likely remain low. Corporate debt yields may go higher, and present future opportunities for that part of your portfolio.

Exhibit 1 and 2 illustrate that that rising debt and lower bond yields in major economies has resulted in slower economic growth. 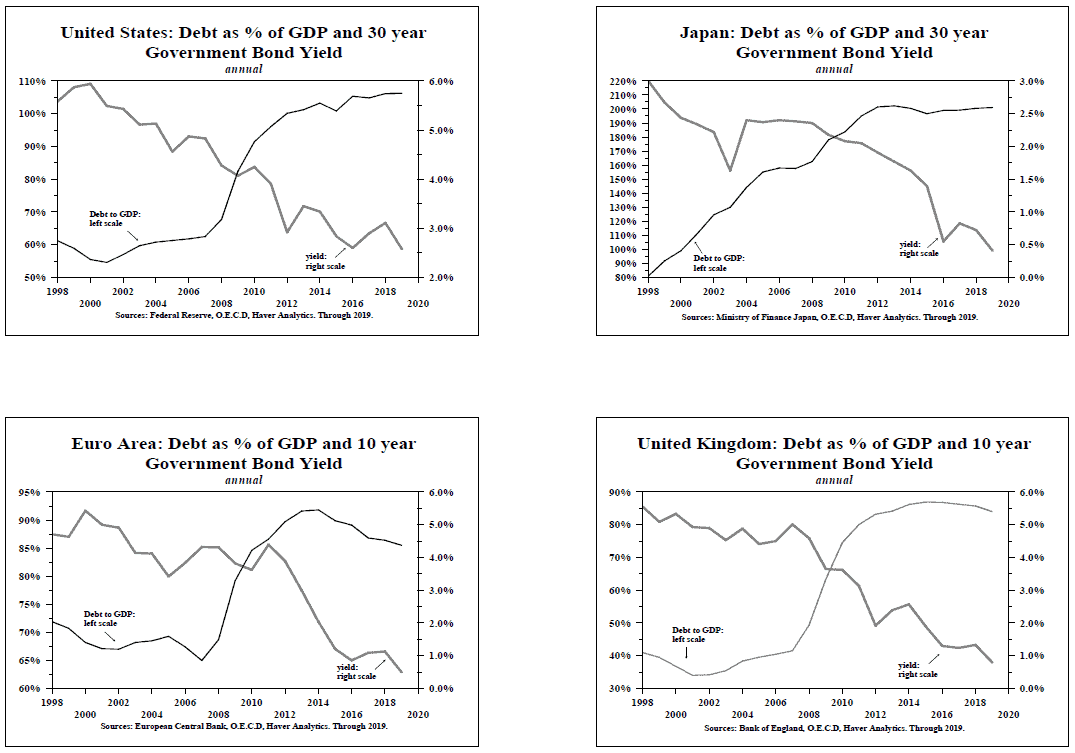 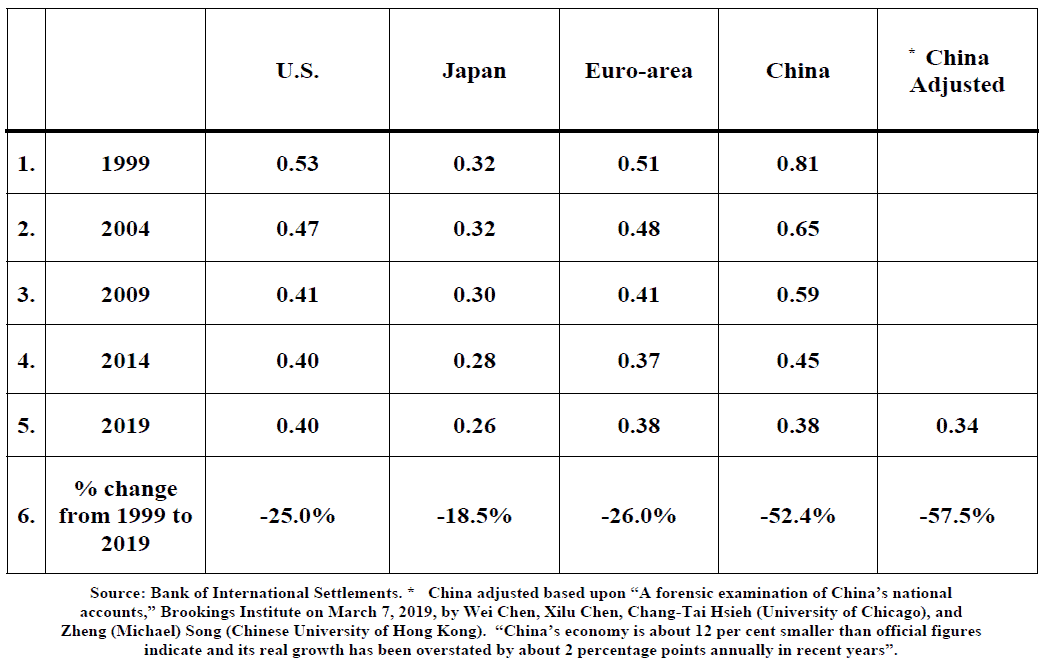