According to the zany theory called the January Effect, they are supposed to go up.  January was rough across most markets.

The doomsayers, armed with historical data, were out in full force predicting the “mother of all bear markets” is just around the corner. And the perma-optimists countered that millennial liquidity would drive the market higher for the next decade.

Markets are complex with a lot of moving parts. Comparing history and extrapolating trends often omits key factors and is seldom a black and white computation.

The doomsayers contend the government manipulated markets by pushing free/cheap money into the system. This incentivized speculative risk taking and has created excess prices across almost all markets. The government did use extreme fiscal and monetary stimulus in response to COVID. Their options were limited: do nothing and risk a prolonged economic downturn; or pump unprecedented amounts of cheap money into the system to encourage economic activity and risk asset bubbles. The stimulus worked. The V-shaped recovery few thought possible in 2020 happened.

But did the government keep their foot on the accelerator too long? Only time will tell.

In the context of markets, the world is relative. Meaning that assets are priced relative to other assets. Money flows where it can get the best bang for the buck. The formulas and metrics are never precise but tend to fall into ranges that help us gauge the risk of decline against future returns.

Today, almost all asset classes are near the high end of their historical ranges. Priced to perfection you might say. Despite the real prospect of rising interest rates, persistent inflation, and political tensions. Things are not perfect. Markets woke up these headwinds for most of January.

Interest rates are key determinants of asset values. When rates go from low to higher asset values tend to decline or moderate. We saw this occur with stocks and bonds in January, while real estate and most commodities have kept moving higher.

Let’s assume you bought a $1,000 bond last year that pays a 3.0% interest rate. Rates increase and the same bond now pays 4.0%. If you wanted to sell your old bond, you would have to lower your price to find a buyer. Who would pay full price for a 3.0% bond when a 4.0% is available?

The inverse relationship between interest rates and bond values is straightforward: when rates go up values go down and vice-versa. So, it follows that with interest rates near historical lows (the long-term average for 10-year treasury bonds is close to 5.0% vs. today’s rate of 1.80%), bonds are considered overvalued today.

The relationship between stock values and interest rates is less straightforward than with bonds. When rates start to rise, there is often a tug of war between stocks and bonds. Investors weigh the safety of bonds against the risk of stock. When rates go up investors sell some stock and buy bonds for their stability relative to stocks.

The common approximation for market value is the Price/Earnings ratio. The price is expressed as a ratio or multiple of a company’s (or a market’s) earnings.

Why is the S&P P/E so much more expensive than its historical average?

With interest rates so low, investors are willing to pay more for stocks. The case for an overvalued stock market based on historical P/E isn’t so strong when we factor in historically low interest rates.

Another factor to weigh is the technology sector in the S&P 500 is about 27% of the overall market. Its growth, profit margins, and returns on capital are higher than other sectors. Investors will pay a higher multiple for technology companies because in aggregate it has superior returns on capital.

From 1975-1995 technology was only about 10% of the S&P. As its weight in the S&P has increased, that would tend to increase the S&P P/E multiple relative to long term averages.

Why is the S&P so much more expensive than other markets?

Here again sectors differences in addition to macroeconomic and geopolitical concerns come into play. If we drill down further to understand the sector differences in these indices, we can see that the US has a much larger weight in technology than these other indices. Then there is demographic, policy, political, and institutional issues that are not easy to quantify.

Over time developed economy stock markets have generated similar returns. However, the US has outperformed international markets by a very wide margin over the past 10 years. Many value investors believe the cycle will eventually revert and valuations differences will narrow.

The relationship between interest rates and housing values is not so straightforward because the supply and demand for housing also impacts price. And a home has value beyond investment value. After all, we need a place to live! Mortgage rates have trended up, yet housing prices have continued to rise. That can’t go on forever. At some point rational heads prevail and prices will moderate. As the chart shows, housing prices have tended to be about 4-5x income. Today, US house prices are over 7x income levels. The last time we saw 7x was before the financial crisis. 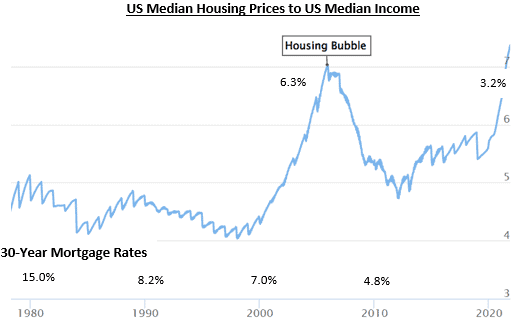 Commodities are determined by supply and demand. But geopolitical events can distort or manipulate prices. Oil is currently up about 70% from last year and it dominates most commodity tracking indices. Russia is a large oil producer. Ukraine is one of the world’s largest producer of grains. Russia’s troop buildup on Ukraine’s border creates fear of lower supply which has driven prices higher. The complex nature of global supply and demand, alternative energy sources, and political considerations make price predictions very difficult.

Several years ago, I was at a conference where an analyst asked Exxon Mobil’s CEO where the price of oil would be in 6 months. The CEO stated with some sarcasm ”I can predict with confidence the price of oil over the next 12 months will be somewhere between $20 and $120 a barrel.”

We can’t know with precision how high interest rates might go or how fast. Will the prospect of future increases slow the economy and corporate profits? And how will markets react?

No cycle is ever the same. We are outside normal historical price and yield ranges, so it doesn’t make sense to be over aggressive. Neither does it make sense to panic.